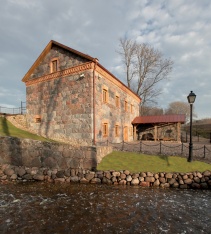 View of the base floor of Liubavas Manor watermill, 2010

Liubavas manor mill has been restored and transformed into a museum

Restoration of Liubavas Manor watermill near Vilnius and its adaptation as the museum is completed. The project dedicated to preservation of valuable cultural heritage object has been implemented by Public Institution Europos Parkas. The project "Restoration of Liubavas Manor Watermill and its Adaptation to Cultural and Public Needs" has been supported by a grant from Iceland, Liechtenstein and Norway through the EEA Financial Mechanism and co-financed by the Republic of Lithuania.

The aim of the project − to restore the mill with all its technological equipment and to create a museum inside for the public. The expected results of this project has been achieved. The cleaved stone watermill with the ornate red-brick moulding will be one of the specimens representing technical heritage in Lithuania. The mill was built in 1902 at the place of the previous mill mentioned in the manor inventory of 1727.

"We wanted to return a forgotten page in history to Lithuania, collecting and analyzing one grain at a time, − says Gintaras Karosas, director of the Public Institution Europos Parkas. − We wish people to discover this important piece of Lithuanian cultural mosaic and would like to thank representatives of different professions for their help in bringing Liubavas Manor to new life".

Liubavas is one of the oldest estates in Lithuania. The reconstruction of the ponds at Liubavas Manor is mentioned back in 1546, in the treasury books of the Grand Duke of Lithuania and King of Poland Sigismund Augustus. In its five hundred years history Liubavas Manor saw the owners representing the Lithuanian political, clergy and cultural elite, including famous sculptor Rapolas Slizienis.

"When restoring Liubavas Manor watermill, we tried that the changes to the heritage object were as little as possible. We sought to retain its authentic details and, if possible, to use building materials of that time. We wanted the mill to preserve its initial atmosphere and the new adjustment elements integrate consistently into its entirety. We spent long hours examining various marks left by the technological equipment on the mill's walls and floors trying to understand the specifics of this equipment. The mill is an entire "world" in itself, with interesting systems," says sculptor Gintaras Karosas, creator of Liubavas Manor museum. In the course of the project, several publications were prepared and issued: leaflet, brochure and book. The illustrated book tells Liubavas history introducing to the architecture, arts, the manor dwellers of the interwar time, millers, mill technological equipment and processes. It is for the first time that the public may see most of the art works, pictures, plans and other documents. The project leader and author of the book also shares Liubavas watermill restoration experiences. The book contains summaries or entire chapters in English. The project publications are distributed to libraries, museums, schools, tourist information centres, various cultural institutions and specialists.

The project also included the creation of the website www.liubavas.lt. All virtual visitors at the watermill-museum will learn about the romantic Liubavas Manor and technological processes of Liubavas watermill, which are presented in an attractive form with a help of interactive videos.

On January 29th, the seminar for heritage specialists was organised with the aim to introduce to them the work accomplished during the project and share the experience. The seminar attracted over a hundred participants. It was attended by heritage preservation experts and owners of heritage objects, historians, restorers and representatives of other related fields.

Liubavas Manor watermill-museum will open doors to visitors this year and then will welcome visitors yearly from April 15th to October 15th.