The Project "Conservation of Liubavas Manor Officine and Orangery and Its Adaptation to Cultural and Public Needs" is supported by a grant from Iceland, Liechtenstein and Norway through the EEA Grants and Republic of Lithuania
The project is implemented by the Public Institution Europos Parkas
The Project partner: the Norwegian Institute for Cultural Heritage Research (NIKU) 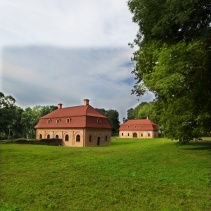 Conservation works of Liubavas Manor Officine and Orangery completed in 2016

Public Institution Europos Parkas has launched, jointly with its partner the Norwegian Institute for Cultural Heritage Research (NIKU), a project on the Conservation of Liubavas Manor Officine and Orangery and Its Adaptation to Cultural and Public Needs which is financed under the EEA financial mechanism's Programme "Conservation and Revitalisation of Cultural and Natural Heritage". NIKU is Norway's largest cultural heritage research institution the specialists of which are hired for the restoration of cultural heritage sites in Europe and other parts of the world.

The aim of the project is to restore the 18th century Officine and Orangery of Liubavas Manor as well as adapt them for the purposes of a museum. The project will be implemented in the period from July 2014 until the beginning of 2016.

In addition to the buildings' maintenance works and the setting up of a museum exposition, the project will involve the organisation, jointly with cultural heritage experts from Norway and Lithuania, of seminars and a scientific conference on Rapolas Slizienis (1804-1881), a 19th century Lithuanian sculptor who lived and worked at Liubavas Manor, publication of information materials, updating of the website etc.

The project will be a continuation of the works of adaptation of Liubavas Manor for museum's purposes. Restoration of the manor's watermill was completed in 2011 and a museum was set up there. The quality of restoration of the Watermill Museum has received the highest recognition: the EU Prize for Cultural Heritage and the Europa Nostra Award.

More information related to the Project:

Liubavas Manor Baroque Ensemble to experience rebirth. Event to report a progress on the project