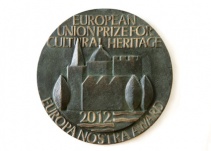 The National Award Ceremony to celebrate honouring Liubavas Manor Watermill Museum with the European Union Prize for Cultural Heritage / Europa Nostra Award 2012 will be held on 18 September 2012. The Ceremony will be delivered at Liubavas Manor Watermill Museum, Liubavas Village, Vilnius District and is scheduled to begin at 11 a. m. The agenda of the National Award Ceremony includes an address by H. E. Dalia Grybauskaitė, President of the Republic of Lithuania.

According to the Rules of the European Union Prize for Cultural Heritage / Europa Nostra Award, national award events are held in each awarded country and are aimed at drawing public attention to the importance of proper protection of cultural heritage.

Europa Nostra is the most influential pan-European organisation designated for leading the effort of forming and implementing cultural heritage policies throughout European scale and is regarded as the Voice of Cultural Heritage in Europe.

The best-preserved objects of the European cultural heritage were conferred 2012 awards at the solemn ceremony held by the European Union and Europa Nostra in Lisbon (Portugal). Out of a record high number of applications received from all over Europe, in 2012 independent experts selected 16 ones, which were awarded for the highest achievements in the cultural heritage conservation category. These awards are also called the Oscars for Europe's heritage. Objects of cultural heritage of only two post-communist countries were awarded.

Sculptor Gintaras Karosas, the author of the project for the restoration of the Liubavas Manor watermill and its adaptation for a museum, received an honourable annual European Cultural Heritage Prize. Gintaras Karosas delivered a report presenting the project implemented in Lithuania. The awards were presented by Androulla Vassiliou, the Commissioner for Education, Culture, Multilingualism, Sport, Media and Youth, and Maestro Plácido Domingo, President of Europa Nostra.

The solemn ceremony held at the courtyard of the Jerónimos Monastery (protected by UNESCO) was attended and addressed by Aníbal Cavaco Silva, President of Portugal, and members of the Portuguese royal family.

The agenda of the European Heritage Congress included various events, meetings, and heritage tours. During the reception that took place in the Palace of Belém, the official residence of the Portuguese President, G. Karosas, the Head of Europos Parkas, presented his book Liubavas to Portuguese President A. C. Silva and invited him to visit Lithuania.