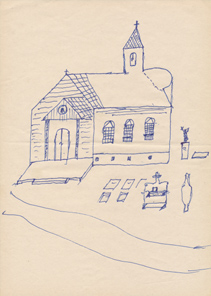 Chapel of Liubavas Manor drawn by the local Edvardas Rinkevičius as he remembered it.
Manor Architecture   Photographs   Hypothetic Images

Liubavas Manor is one of the oldest in Lithuania. Its architectural development has seen many changes.

No evidence is available of how manor houses looked like in the 16th century however we known that there was a mill in the estate. Location of that mill is supposed to be the same as that of the current mill, and the arrangement of ponds under repair described in the treasury books of the year 1546 kept by the Grand Duke of Lithuania Žygimantas Augustas (Sigismund Augustus) is retain till now. The assumption is also confirmed by the fact that the estate road network and layout hardly changed over the time.

Liubavas estate, being one of the elderships of the Grand Duchy of Lithuania with the territory up to the Siesartis Lake and the Kirneilis Lake near Molėtai, definitely had a well developed infrastructure. In addition the mill, other buildings could be located on the other side of the Žalesa River: the administrative building in front of the mill at the crossroad, the manor house - in place of the present glasshouse (orangery), the treasury - in place of the servants' house (officine). The archaeological research revealed a lot of reconstructions, foundations, tiles of the 16th-19th centuries, crockery fragments, etc.

The manor estate included two cemeteries. One cemetery was common, while the other one was only for family members of the owners. All roads in the estate territory, as well as several kilometres outside its territory, were stone-paved.

The inventory dated 1727 show that the manor estate already consisted of approximately 20 buildings: another mill was under construction, there were the brewery, treasury and bakery. These years saw the reconstruction of the manor with folwark.

The chapel and the baroque ensemble of the manor with the grand two-storey portal, supposedly similar to that of Vilnius Basilian Monastery, were built in the 18th century. The brewery, the bakery, the manor with a folwark and the pond system remained unchanged until the World War II.

At the end of the 19th century the foreign foremen were hired to reconstruct the mill and the entire water system; the innovations also included building of the imposing stone ice-storage, excavation and deepening of several ponds, installation of the drainage system in the fields. In 1914, after the classicist manor house burned down, the owners of the manor moved to the old folwark. The manor was plastered and extended. The layout of 1919 shows the operating system of seven ponds: its oaken pipes and stone channels continued to serve for running water for many decades. Man-made stony isles were formed in one of the ponds and in the Žalesa River.

The inventory of the Nemenčinė Church shows that the chapel of Liubavas Manor was sanctified in 1741. The chapel was reconstructed in the neo-gothic historical style in the middle of the 19th century in accordance with the design of Rapolas Slizienis (Rafał Slizień), sculptor and the owner of Liubavas Manor. A wooden building that stood at the crossroad, in front of the chapel, was also reconstructed and probably by the same author at the same time. In 1863 services were forbidden in the chapel but in 1874 renews again at the request of Gustavas Slizienis (Gustaw Slizień). The chapel performed the function of a church until 1945. Inhabitants of the surroundings would gather to the chapel for Sunday services. The mausoleum located in the basement of the chapel is the eternal resting place for the author of the reconstruction, his wife, children and family members.

The interwar period and the parcelling process weakened the power of the manor; some buildings lost their initial function. Even though they retained their names, the brewery and the bakery became a home for farmhands, while the administrative buildings near the river was turned into the manor shop.

The Soviet period was very painful for Liubavas Manor. In 1940, Rapolas Janas Slizienis (Rafał Jan Slizień), the last owner of the manor, was exiled by the Soviets to Siberia and died soon. The manor was nationalised together with the collection of paintings, valuable furniture and books.

In 1947 Liubavas Manor was deserted by its all dwellers - they left for Poland. The manor was inhabited by political prisoners. A few years later they were replaced by new inhabitants from Belarus, who had no idea how to look after the manor properly. The new owners of the manor were changing at stunning speed like in kaleidoscope: Maišiagala Soviet farm, Bratoniškės, Bolševikas, Neris, Ažulaukė kolkhozy. The buildings of the manor collapsed one after another, the system of ponds was damaged and random buildings appeared in the manor estate.