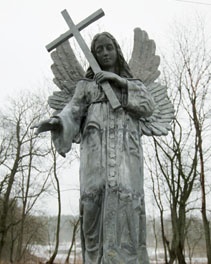 Sculpture of Liubavas Angel after restoration in 2010

In the late 19th or early 20th century, the angel sculpture was placed near the chapel of Liubavas Manor. The zinc sculpture is thought to be cast in one of Warsaw foundries. The ingot suggests that it is an original work, however, the author is unknown.

Up to 2003, Liubavas angel, although a bit damaged, stood at the dilapidated chapel. Later most of the sculpture was destroyed. The retained photos helped to restore and partially recreate the destroyed parts of the sculpture. Restoration of the angel (mediator/messenger/guardian/prophet) sculpture is also a sign of respect to honourable owners of Liubavas Manor - to the Tiškevičiai (Tyszkiewicz) and Slizieniai (Slizień) families. The history of the angel is closely related to the history of Liubavas Manor.

Liubavas angel was restored in 2009 on the initiative of the sculptor Gintaras Karosas. The parts of the sculpture that had not survived were authentically restored using zinc.